Which distortion is right for me?

We now have FIVE, yes five, as in 5, distortions in our lineup. That means that you have a lot of options when it comes to making things distort! But also a lot of choices, especially if you only want one or two. So in this post, we’ll go through a handy flowchart and figure out which distortion(s) are best for you, compare their features, and answer some FAQs! 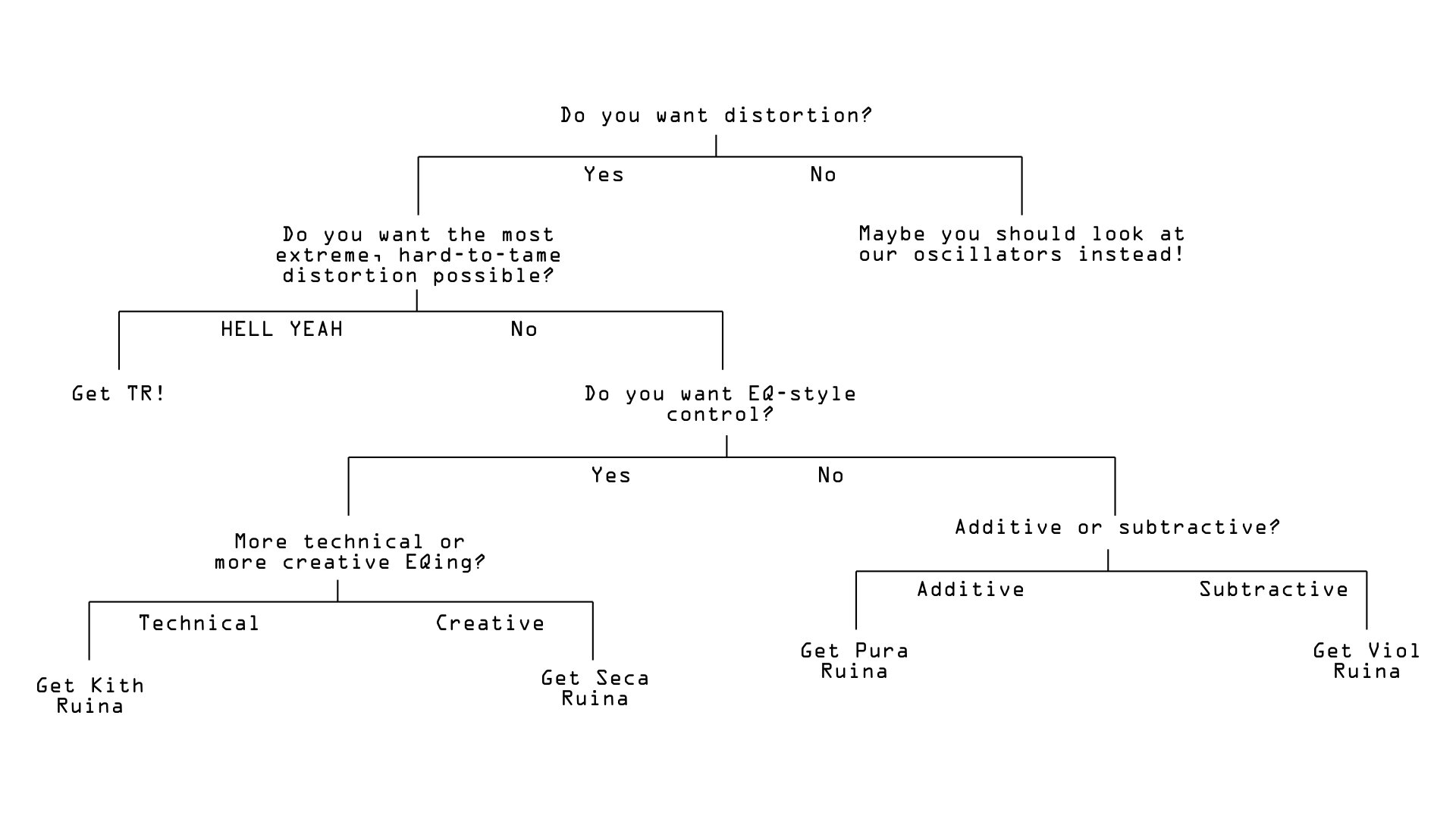 Do you want distortion?

If you answered yes to that question, welcome! We have quite a few for you to choose from. Read on to get a better idea of your options on your quest for distortedosity.

If you answered no… Maybe you should look at our oscillators instead!

Do you want the most extreme, hard-to-tame distortion possible?

If you answered HELL YEAH, check out the Terci Ruina! It’s the most overdriven, fuzzy, destruction-inducing module in the series. It’s guaranteed to distort your socks off. Plus, with three separate distortion circuits, you can distort up to three things at a time (or just one thing a whole lot), which is pretty cool. Honorable mention in the super-distorty-distortion category goes to Viol Ruina, though; more on that one later.

If you answered No, read on.

Do you want EQ-style control?

Having tonal control in a similar fashion to an EQ can be very useful when used with distortion. Sometimes, you want a bit more low end and less highs. Or the opposite. Or something in between. No matter what you want to do, it can be handy, but it’s also definitely not the only way to get your distortion distorting, if you know what I mean. And what I mean is that I like to distort stuff. Anyway, if EQ tickles your fancy, check out this next section!

We have two kinda-like-an-EQ distortions: Kith Ruina and Seca Ruina.

KR, my most-used module in the series, is a bit more suited to set-and-forget distortion duties. It has a drive section and a two-band shelving EQ. There’s separate I/O for each, so they can be used independently, but they’re normalled together so they can be used in series without any extra patching. The EQ is really clean and is great for mix duties as well. I tend to use it like a channel strip; a bit of saturation from the drive at low settings and some tone shaping with the EQ. It can get pretty crazy, though, with more extreme settings.

SR, on the other hand, is completely different. While in structure it looks a bit like a traditional three-band EQ, the functionality is quite different. Each section (high, mid, and low) has its own volume/drive knob and corresponding CV input. Fully counterclockwise, a section is silent. Fully clockwise, a section is at full volume and drive. With some CV, this becomes a wonderful way to harmonically animate a sound. The drive is a little less aggressive than the other modules in the series since there’s so much going on in the module. But that’s not where it ends! There’s individual outputs for each band, so you can further process each band separately, as well as a sum output. The sum output has its own VCA, too, so it’s great for controlling the volume of one of our oscillators in a standard voice patch. SR has lots of creative options for CVing, unusual patch techniques, and fun sonic exploration.

I don’t want EQ! Give me something different!

Well okay then! That takes us to our last question: Additive or subtractive?

Subtractive synthesis: it’s an old favorite! Sometimes all you need is a nice low-pass filter. With Viol Ruina, you have that… and way more! There’s two sections in VR: first, there’s the filter section. There’s a frequency knob that controls the cutoff of the 24db lowpass filter and a corresponding CV input, a Q knob that controls the resonance (which there’s a lot of), and two switches. The first switch, Laser, engages a built-in envelope follower. So if you send in something with some dynamics, the filter cutoff will follow the volume of the sound. The second switch, Mod, engages feedback-FM, routing the input signal to the cutoff frequency of the filter, making for some pretty ridiculous filter FM. And that’s even before we get to the Mangle section!

The Mangle section has one knob: Mangle. Shocking! It’s a bassy drive with lots of distorted goodness. Of course, the Filter and Mangle sections have separate inputs and outputs so you can use them separately, but they’re normalled together so they work in series without any extra cables, too.

Subtractive synthesis is one of the most common techniques in patching and just synths in general. However, the opposite concept doesn’t get as much love. That doesn’t mean it’s not awesome, though! Meet Pura Ruina. PR does some pretty crazy stuff. It’s a three-stage full-wave-rectifier. What’s a rectifier, you may ask? Check out this handy graphic! While that may look like a pretty boring concept on paper, it sounds incredibly cool. With level controls for each stage and the dry signal, it creates some pretty ridiculously cool upper harmonics even with something as simple as a sine wave. It also has CV inputs for each stage’s volume, and individual stage outputs, so you can process the sounds it creates in even more extreme ways if you want to. It’s a favorite around the office; it ends up in almost all of our patches nowadays.

Check out what it can do in this patch, alongside Numeric Repetitor and Pons Asinorum for modulation, processing a saw wave:

Still not sure which Ruina’s for you? Let’s answer some common Q’s.

What if I want CV control?

We can do that! Seca Ruina, Pura Ruina, and Viol Ruina all have CV ins. PR is probably my favorite for crazy CV-ability.

What if I want separate band outputs?

If crazy parallel processing is your thing, check out Pura Ruina and Seca Ruina. They all have multiple outputs for different stages and bands.

What if I want to just FSU*

Terci Ruina has the most drive (over 100dB internally) so it’ll pretty much annihilate whatever you put into it. Viol Ruina, however, gets really weird with its audio-rate FM and envelope following. So go for TR if you want straight distortion, or VR if you want crazy things you’ve probably not heard much before.

What if I want the distortion that has the most sordid history?

Pura Ruina: it was a bloodbath. There were tears. New company policies had to be enacted and our entire design process was restructured from the ground up. And Markus almost got completely stranded in the desert in the middle of it all (true story, actually). We try not to think about it too much because we’re all scarred, figuratively and literally. That’s a lotta drama for an 8 hp distortion, isn’t it?

I just want to distort my kick.

Go for it! They can all do that really, really well, but my personal choice is Terci Ruina. Or Kith Ruina.

I need something small.

All of the Ruinas are pretty compact, but TR, KR, and VR are all just 4 hp.

Of course you do! And we’re here to help. TR tends to pick up radio stations, if you have one nearby. Just don’t plug anything in and turn up the knobs… You never know who you’ll hear.

Which is your favorite?

But of course if you ask them directly, both Kris and Stephen say they love all of their children equally.

I really want something in stereo.

We do too. Check back next year, or you can do what one of our favorite customers has been doing: buying two of every. single. distortion.

Which one is the most different from its initial conception?

Oh good gods. All of them. If you go all the way back to our very first distortion concept, the one that started the whole series, it’s the clear underpinning of most, but none even vaguely resembles it. TR is probably closest, beyond that, KR started as not a distortion at all.

What’s the airspeed velocity of an unladen swallow?

Hopefully, this helped you in the decision making process of picking out which distortion is right for you. Or, you know, you could just get them all. And then run them in series. Ridiculous, you say? Of course it is! Let’s hear what it sounds like anyway because holy heck is it a lot of fun!