Ask and We Shall Receive

Last week, we asked you to fill out a survey. Admittedly, there was bribery: we offered the chance to win a module or other goodies. Congratulations to our winners, Alex (a sparkly new Numeric Repetitor), Chris (super smooth new NE hoodie), and Jason, Mestres, and Sarah (NE t-shirts). Honorable mention to Pierre-Francoise who had the best factoid in “is there anything else you want us to know?” We had no idea but we did need to know.

We learned some great stuff from you, and we are so grateful to you for sharing information! While this is in no way scientific or a random sample, it’s really helpful. We thought we’d share some of the neat things we learned! Plus it’s my favorite thing to plow through data. Prepare for figures.

At least one person was surprised we asked this, but there is a method to our madness! Everyone at NE is a righty, and we are curious how many of our users approach modular as a lefty. From a design perspective, this matters a heckuva lot. It may not be something we can solve here and now, but it informs our design having this info in our back pocket!

And it turns out that the survey takers have surprising dexterity: 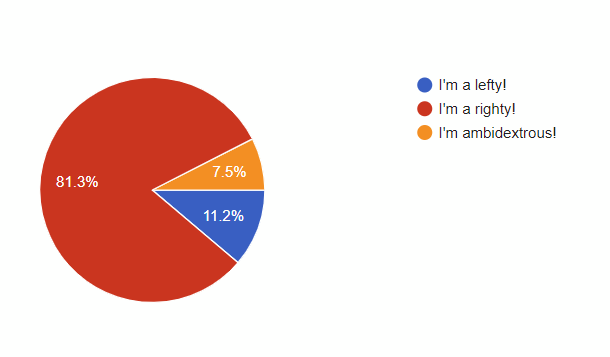 7.5% of you are ambidextrous. Impressive!

We got a few people giving us feedback on our naming convention, but it came out pretty even.

A lot of people wanted to go to a lot of synthmeets. More were mentioned, of course, but here are the top contenders and where you might find other synth nerds like yourself. Also where we’re likely to be headed! 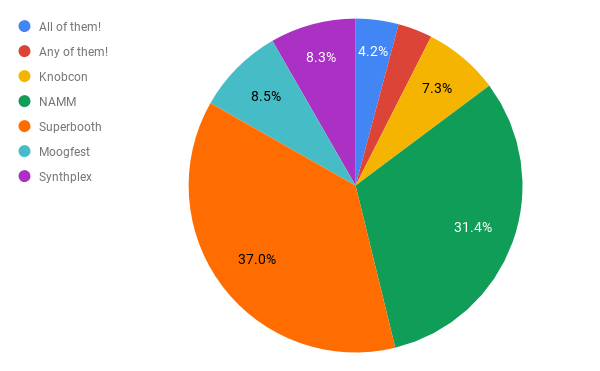 Animals were a common theme

Animals popped up a surprising amount in the free response section. Not everyone mentioned animals, of course; the figure includes only responses that did. I was a little disappointed that there were no dog mentions, but this was tempered by the fact that several of the cat comments were about how their cats were assholes. Module you can’t live without

We had over 760 responses and most people listed multiple modules in this category. A few people listed broad stroke things they can’t live without (LFOs, mults, VCAs, attenuators, and, cleverly, the PSU). Loads of people listed modules I need to look up and find out more about! If nothing else, this was a fantastic way to just find out some of the cool stuff that’s out there that’s so hard to keep up with!

Given the number of responses and complexity of sorting them, I grabbed only the ones that had over 1.5% of total responses. This is obviously a pretty non-random sample, given that the survey was only linked from our Instagram, so take it with a grain of salt. 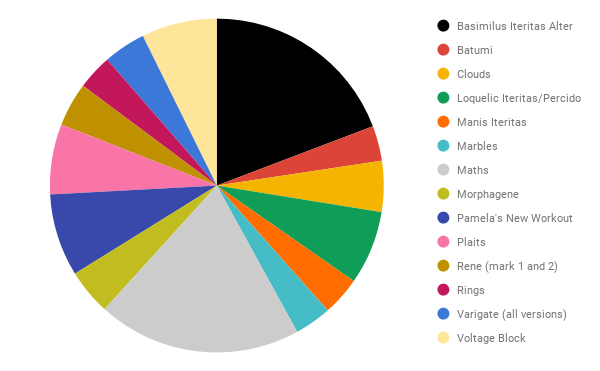 Several people took the opportunity to thank us and then mention that they love Make Noise. So do we! True fact: one of the top two modules on my personal wishlist is the QPAS.

To the person who was off to buy ice cream: I can’t believe you didn’t tell us what flavor.

We took a lot of blame for empty wallets and plummeting social skills. While we regret any suffering we might cause, we invite those folks to shift that frame of reference a touch and come to think of it as BIA user Giordan Postorino has, when he emailed me a while back to tell me that "[The BIA has given me a] feeling of self-worth and inclusion that's actually way better than having friends.” Take heart, modular users!

Thank you to all who took the survey, and especially to all of of you who wished us lovely days and kind words. I actually read every single response. Also, people left small comments in lots of languages, and it was fun to see what they all meant. And with that, Tack och hej!